Can We Reduce Non-Contact Lower Extremity Injuries via Field Selection?

While the main discussion points brought to the forefront by the USWNT are equal, consistent, and safe playing conditions [12], in this blog post we will examine the literature on injury incidence rate on artificial turf vs. natural grass and work towards the question of preventing non-contact lower extremity injuries.

Unsafe Playing Conditions in Hawaii – US WNT vs. Trinidad and Tobago match cancelledView image on Twitter 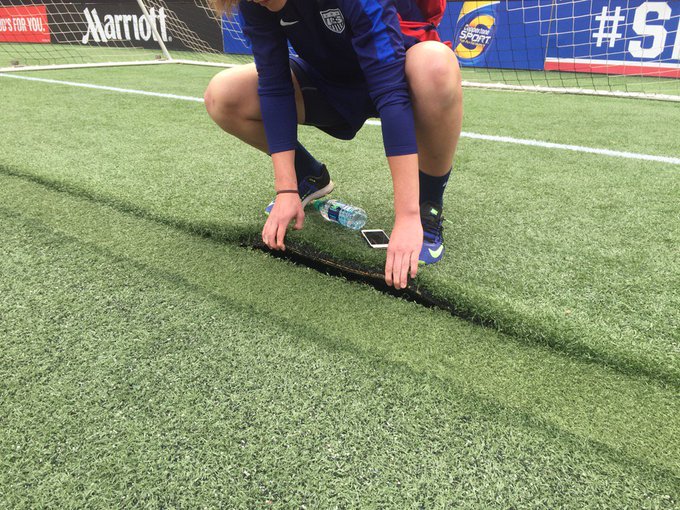 The Physics of the Soccer Pitch and Lower Extremity Injury

While the causal relationship is still not exactly clear, valgus knee is a characteristic widely accepted as related with lower extremity injury [17]. ACL loading is higher during quadriceps muscle application combined with an internal, rather than an external rotation [18]. However, quadriceps loading combined with external rotation leading to ACL impingement. cannot be ruled out as a ACL injury mechanism [18]. Finally, Shimokochi et. al. note that “weight-bearing, decelarating activities” increased ACL loading.

As an anecdotal illustration suppose higher friction causes the planted foot to have a higher chance to be fixed. Now that the foot is fixed, a misalignment between the direction the foot is planted and the direction the knee and hips are flexing or rotating can lead to high stress, potentially leading to ACL strains or tears.

Studies have used physics to describe why first generation artificial turf (1960s) is more dangerous than natural grass [2]. Friction, cutting, stopping and turning forces are a primary point of discussion in comparative field studies. Wannop et. al. perform a comprehensive review of decades of literature on the cleat-surface interface [9]. The simplest model of friction is the static, linear one. While it does not describe the complex cleat-surface relationship, the basic premise is important to consider. The friction force is a function of the product of at least two key variables – the coefficient of friction between the player’s cleat (or shoe) and the surface, and the normal force (which is equal to the force of gravity). However, three dimensional effects (e.g. torsional friction), varying player cleat surface profiles and multiple substrate layers beneath the turf and other variables can add layers of complexity on top of a linear friction model.

Figure 1: Linear friction and model and the complexity of the artificial turf (schematic created by EuMotus is for illustration purposes only and not representative of all types of pitches)

It is also an observed phenomenon that artificial turf playing fields can be up to 50 degrees F higher than natural grass and generally 35 to 55 F warmer than grass fields [3]. It can therefore be surmised that increased player discomfort (e.g. increased overheating, dehydration) could be another confounding factor in the question of injury rates in artificial vs natural grass pitches. There is evidence that artificial turf mechanical properties are a function of temperature [4], leading to the implication that artificial turf surfaces may be better suited for certain temperature ranges and conditions relative to others (e.g. cold vs. hot climates).

Moving away from physics theory, let’s investigate the literature on lower extremity injury incidence rate and if one type of field increases or reduces risk.

(Lack of a) Conclusion

It should be noted that the below review is far away from comprehensive or performed with scientific rigor. The results point in differing and sometimes contradicting directions. A clear conclusion, and even further proof of causality, in which type of fields may pose greater or lesser incidence of lower extremity injury is not apparent. Some selected studies may point to an increase or decrease of specific injury incidence associated with a particular field. However, on aggregate there appears to be no significant difference between modern artificial turf and natural grass injury rate.

Below is a non-comprehensive list of limitations and comments on this literature review:

In male European soccer leagues, researchers once again did not find a significant incidence of injury risk when comparing play on natural grass vs. turf fields. However, the researchers did find with a 95% confidence interval that there was a higher incidence of ankle sprains on turf than on grass. The authors noted caution, as the sample size may not have been large enough.

Ekstrand et. al. examined 15 male and 5 female teams on the latest (third-generation) UEFA approved artificial turf and did not determine increased incidence of injury relative to natural grass pitches for either females or males. With at 95%+ confidence interval the authors found that men were more likely to pick up an ankle sprain, and less likely to pick up a quad muscle strain during matches [14].

Strutzenberger et. al. found that there was not an increased incidence of injury for female collegiate level soccer players on artificial turf. Ground contact times did not differ between natural grass and artificial turf surfaces. The researchers commented on potential for knee injury risk reduction artificial turf due to decreased valgus and decreased internal rotation [13].

Studies Which Find That Turf Has Higher Incidence Rate of Injuries

Iacovelli found a correlation between incidence of injuries on turf during game day relative to natural grass in collegiate football (note, not soccer) players at The University of Iowa [6].

Dragoo and Braun do an excellent job reviewing field types and their association with injury incidence [2]. Here are selected findings and references pertaining to artificial turf vs. natural grass debate:

Coaches & Trainers: How to reduce the risk of non-contact lower extremity injury

Ok, so if we can’t know for sure which type of field is safer, what can we do to reduce the risk of lower extremity injuries due to field conditions?

[12] USWNT via The Player’s Tribune. On Canceled Match vs T&T and Field Conditions in Hawaii. December 2015. https://www.theplayerstribune.com/uswnt-match-canceled-field-conditions/. Accessed September 2017.